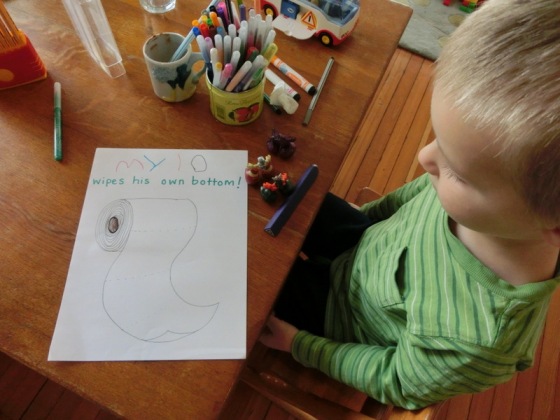 Mylo and I just sat down together this morning to make a new chart. I’m all about charts. Visual progress, rewards, an understanding of expectations… This one was long overdue.

With kindergarten looming for this typical youngest, I realized it was high time we get our act in gear, and I teach him to wipe his own bottom. His response any time I’ve brought it up in the past is: that is the grossest thing in the whole wide world. Poor guy. I understand, I really do. Anyway, I’ve been lenient about wiping because I was a little traumatized by my daughter who wanted to be in control of everything and wipe herself from day one of potty training. That was a lot of brown undies, folks, and I don’t even want to think about all the poopy hand + insufficient washing scenarios I was oblivious of. But it’s time. He’s a good hand washer. He’s four, for goodness sakes. He’ll be fine, and I won’t have to come running with every WIIIIPE MYYYY BOOOOTTOOOMMM.

It’s a good day to start new things. We are feeling confident.

We’ve also been working on the nose picking thing. Ever since he discovered he has magic fingers that can turn soft boogers into hard little balls, he’s been pretty keen. (He figured this out in the car with Grandma and was SO excited. He wanted to know if Grandma had magic fingers too.) When I ask him to stop or get a tissue, he patiently explains that there are boogers stuck way up high in his nose that aren’t comfortable and tissues don’t work and…isn’t four-year-old logic hard to reason with sometimes? They know pretty much everything already.

He just came up to me with his big brother’s magnifying glass and said I want to burn ants, Mama. I decided to skip the ethics of ant burning and keep it simple. Oh sorry, Mylo, but the ants are all deep under the ground because it’s still winter. His bottom lip stuck out; he slumped down on his chair: But I wanted to burn ants every day. He recovered quickly, though. He’s singing a song with the magnifying glass squashed to his face, inspecting the breakfast crumbs on the table.

Mylo often races around the house with that one special rocket, race car or plane in his hand, narrating an entire adventure as he goes. Lately I’ve been hearing some good things that I might try to apply to my own life:

…and he took off… like a champion, and he was just not scared and he did go exploring…

We could all use a little bit more of that in our lives, wouldn’t you agree?

Ida Fischer has been involved in MOPS for 2 years and now serves as a Discussion Group Leader. She is married to Maarten and mother to Sam (9), Noa (7), and Mylo (4). She enjoys everything outdoors, reading, and spending time alone to paint. You can find her blog and artwork at Ida Fischer Art and Illustration.